Disney to Release 'Onward' Early on Digital Amid Coronavirus Pandemic. 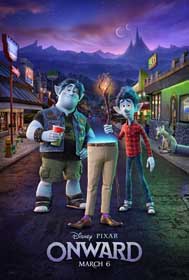 It has been announced that the new Pixar movie Onward is set to hit Disney’s streaming service in around two weeks, within a month of when the movie was released in cinemas.

The Onward home release is an unprecedented move from Disney due to how quickly it has jumped from the big to the small screen.

The Pixar movie - voiced by Chris Pratt and Tom Holland - will be available to buy digitally and via Movies Anywhere for $19.99 starting at 5 p.m. PT. It will be made available early on Disney+ on April 3 in the U.S.

Onward, which first hit theaters in early March, is among a raft of current releases that are counting on home entertainment to make up for the unprecedented closure of cinemas across the globe.

Also heading to digital will be Paramount feature Sonic the Hedgehog, which will be made available for early purchase on March 31. The film will be available on 4K Ultra HD, Blu-ray and DVD on May 19.

"While we're looking forward to audiences enjoying our films on the big screen again soon, given the current circumstances, we are pleased to release this fun, adventurous film to digital platforms early for audiences to enjoy from the comfort of their homes," said Onward director Dan Scanlon and producer Kori Rae.

Onward joins the likes of Warner Bros. Pictures Birds Of Prey and Universal’s The Hunt, Emma and The Invisible Man, all of which hit the home formats ahead of their planned release.