Top Gun 2: Maverick Has Been Delayed Until December. 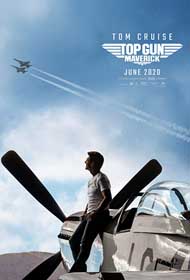 Top Gun: Maverick, the sequel to the 1986 Tom Cruise fighter pilot classic, was set to arrive June 24th, but will now hit theaters December 23rd. Meanwhile, A Quiet Place Part II - which was postponed a week before its scheduled March release - is now set to hit theaters September 4th.

The decision to move Maverick all the way into December is to allow Cruise time to prepare for Mission Impossible 7.

Movie theaters have started to estimate that they may be open in time for the summer, but it looks like most of the big movies have all gone to new release dates. Warner Bros. is holding strong with Wonder Woman 1984, which will be released in mid-August.