David Arquette to return as Dewey Riley for Scream relaunch. 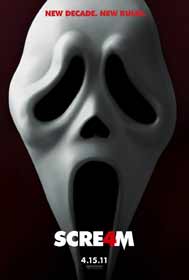 "I am thrilled to be playing Dewey again and to reunite with my 'Scream' family, old and new," Arquette said. "'Scream' has been such a big part of my life, and for both the fans and myself, I look forward to honoring Wes Craven's legacy."

Though Arquette is the first member of the film's ensemble to be officially announced, the filmmakers are in conversation with other legacy cast members.

Matt Bettinelli-Olpin and Tyler Gillett of the filmmaking group Radio Silence are on board to direct the project, making it the first of the franchise that will not be helmed by deceased horror master Wes Craven.

Plot details for the reboot are under wraps, though Spyglass said conversations are underway with other legacy cast members to join the film.

The original "Scream" debuted in 1996 with Neve Campbell starring as Sidney Prescott, the target of the Ghostface killer.