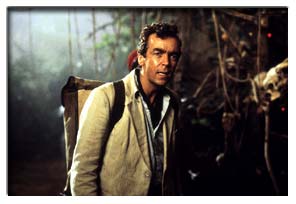 The film version of animated TV show MR BENN has been binned.

British actor JOHN HANNAH - who plays MATTHEW in FOUR WEDDINGS AND A FUNERAL (1994) - has admitted defeat in his quest to star as the civil servant who has his life changed every time he stepped into a fancy dress shop.

Hannah's associate and film producer JEVON O'NEILL hasn't been able to raise the $6 million (£4 million) needed to get the film into pre-production, even though the script and screenplay were finalised four years ago.

Angry O' Neill blames the British film industry calling it "stale" and saying it has lost touch with the public. He moans, "The industry is not responding to larger scale ideas like Mr Benn, which is a broad cinematic approach to a very different kind of subject. "I think it's exactly the kind of film we should be making in this country rather than just foul-mouthed gangster movies or HUGH GRANT wannabe movies.

"Everything is on a small scale with small budgets, no-one's willing to stick their neck out for once!" He adds, "If I had $75 (£50) for every gangster film we've made in this country I would have the budget to make Mr Benn." BEN KINGSLEY and JANE HORROCKS had also been linked to Mr Benn, made famous during the 1970s on BBC1 TV. (JD/WN/KW)