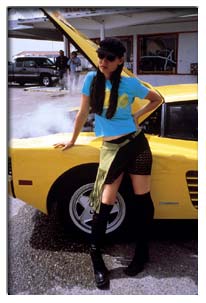 ALLY McBEAL is set to shock fans yet again when the new series airs in America next week (23OCT00).

LUCY LIU's character LING will reveal a sexy secret which creators of the show hope fans try out for themselves. In the series opener, Ling confesses to her girlfriends that she uses "a little adhesive" to stick dollar bills to her privates. She wears the bill all day, so she smells of money during sex.

The last season of Ally McBeal opened with a sex scene in a car wash and a lesbian clinch between Ling and the show's title character, played by CALISTA FLOCKHART. (KL/WNV/RGS)