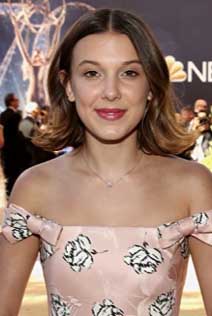 Millie Bobby Brown has signed on to star in an adaptation of Tess Sharpe's novel The Girls I've Been that she'll also produce alongside Ozark's Jason Bateman.

"The Girls I've Been" is based on an upcoming novel by author Tess Sharpe about a con artist named Nora who must use her powers of persuasion and impersonation to get herself, her girlfriend and her ex-boyfriend free during a hostage situation at a bank.

Jason Bateman, who has his own connection to Netflix via Ozark, is on board to produce the film, which has yet to nab a writer or director. Brown is waiting to be called back to finish shooting Stranger Things' third season, and she's the star of Enola Holmes, which the streaming service bought and will premiere in September.

Millie Bobby Brown will next been seen in 'Enola Holmes', which is based on the Enola Holmes Mysteries by Nancy Springer. Brown stars as the title character, the younger sister of Sherlock and Mycroft Holmes, and the film follows the young heroine as she awakes on her 16th birthday to discover that her mother (Helena Bonham Carter) has vanished and an assortment of gifts has been left behind, but with no apparent clues as to the whereabouts of her mother. Now in the care of her two older brothers (Henry Cavill and Sam Claflin) who want to ship her off to a finishing school, Enola escapes through London to find her mom. ENOLA HOLMES will debut on Netflix in September 2020. Millie Bobby Brown will also be starring in Godzilla vs. Kong (2020), which is currently slated for a May 21, 2021 release.