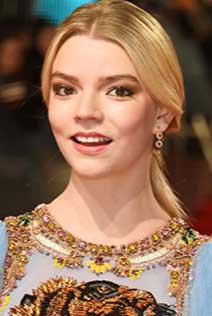 Anya Taylor-Joy, Chris Hemsworth and Yahya Abdul-Mateen II have all signed up to star in George Miller's'‘Mad Max' prequel 'Furiosa'.

Based on Charlize Theron's Imperator Furiosa character from 2015's 'Mad Max: Fury Road', Taylor-Joy will play the title role, a younger version of Furiosa. Hemsworth and Abdul-Mateen's characters, along with the story details are currently being kept top secret.

Anya Taylor-Joy said her take on the Furiosa character in the forthcoming Mad Max prequel will differ from Charlize Theron's original portrayal in Fury Road. Australian director George Miller launched the Mad Max franchise as a trilogy back in 1979, starring Mel Gibson as "Mad" Max Rockatansky, a violent police officer who tries to take down a motorbike gang and protect his family in dystopian Australia. Those early films' post-apocalyptic themes and wasteland imagery are ingrained in popular culture, with Miller being credited as bringing Australian cinema to the global stage.

Back in May, confirmation came from a New York Times interview with Miller who stated that they are on the look-out for an actress in her 20s to take on the role of a younger Furiosa, laying to rest any idea that Theron may go through the de-ageing process for the new movie. With the casting of Taylor-Joy as the young Furiosa, they decided against that idea.

"For the longest time, I thought we could just use CG de-ageing on Charlize, but I don’t think we’re nearly there yet. Despite the valiant attempts on ‘The Irishman,’ I think there’s still an uncanny valley. Everyone is on the verge of solving it, particular Japanese video-game designers, but there’s still a pretty wide valley, I believe."

Miller already has Furiosa's backstory planned out from his time on 'Fury Road' which includes what her life was like in the idyllic ‘Green Place,’ why she was taken from the group of woman warriors the Vuvalini, and how she became the hardened warrior we meet by the time we meet her in 'Fury Road'.