Dave Bautista to Produce and Star in Sci-Fi Fantasy Film 'Universe's Most Wanted'. 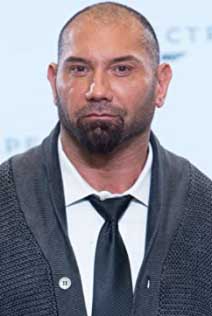 Dave Bautista and director Brad Peyton are teaming up on "Universe's Most Wanted", a sci-fi fantasy about a small town’s fight to save the world.

The film will focus on a small town that gets a big surprise when a space ship carrying the universe’s most wanted and dangerous criminals crash lands in their backyard. Soon the sheriff’s son becomes a hero when he finds himself helping an intergalactic peacekeeper (Bautista) to keep the ragtag group of alien prisoners from escaping and taking over the world.

"We couldn't be more thrilled to get going on 'Universe's Most Wanted'," Peyton said in a statement. "This is the type of fun, mysterious and irreverent adventure we all need right now."

Peyton's directing credits include Dwayne Johnson vehicles Rampage (2018), San Andreas (2015) and Journey 2: The Mysterious Island (2012), as well as Netflix's post-apocalyptic series "Daybreak" and "Cats and Dogs: The Revenge of Kitty Galore". Bautista recently starred in in the family film "My Spy" and the buddy-cop comedy "Stuber". As Drax the Destroyer in the Marvel Cinematic Universe, he's been featured in "Guardians of the Galaxy", "Avengers: Infinity War" and "Endgame" and will next appear in "Guardians of the Galaxy Vol. 3".