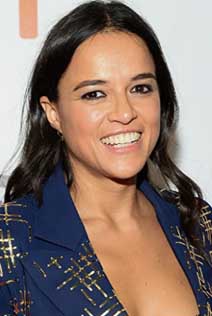 Michelle Rodriguez and Justice Smith have closed deals to star in the film adaptation of "Dungeons & Dragons", Hasbro's popular game franchise from Wizards of the Coast.

Chris Pine was the first star reported to be joining the cast of this new Dungeons & Dragons movie from Paramount and eOne, and now he's been joined by Rodriguez and Smith

Jonathan Goldstein and Jonathan Francis Daley are set to direct the film from a screenplay they've written, based on a draft by Michael Gilio. Goldstein and Daley previously wrote the screenplay for "Spider-Man: Homecoming", and they last directed the Warner Bros. and New Line film "Game Night".

Plot details behind this latest take on the IP are being kept under wraps. Dungeons & Dragons is a leading fantasy entertainment franchise, fueled by the imagination of storytellers around the world. More than 40 million fans have interacted with or played D&d since it was first published 46 years ago, including videogames and livestream entertainment on Twitch and YouTube.