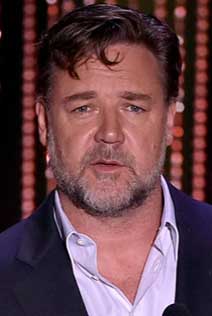 Russell Crowe has been upgraded to director of the upcoming psychological thriller Poker Face.

He was previously just an actor in the project, but will now take over from Gary Fleder as director.

Set in the world of high stakes poker and international finance, Crowe stars as a tech billionaire caught in a risky card game.

The cast also includes Liam Hemsworth, Elsa Pataky and Wu-Tang Clan frontman RZA, a long-time friend of Crowe's. While Hemsworth and RZA's roles are not clear, it has been reported by local press that Pataky plays a glamorous croupier.

Crowe, who is close friends with Chris Hemsworth, has kept his casting choices close to home, adding Chris' wife Elsa Pataky and his younger brother Liam Hemsworth to the film's cast.

Production continues on the film despite strict lockdowns for the whole of Sydney, the most intense since the start of the pandemic era in 2020. Crowe’s Poker Face crew joins stars like Nicole Kidman and Natalie Portman in keeping the city on the film production map despite tough safety restrictions.