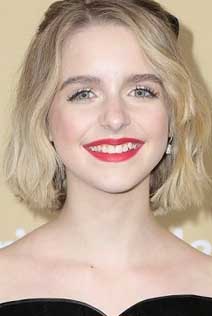 Actress McKenna Grace is said to be part of the party in Olivia Wilde's sports film about the Olympian and gymnast Kerri Strug.

The role of McKenna in the film has not yet been announced, however 'Jojo Rabbit' star Thomasin McKenzie will play the role of Strug.

Filming is set to begin in 2022 on the movie about Olympic gymnast Kerri Strug. Based on the book Landing On My Feet, A Diary Of Dreams by Strug and John P. Lopez, the movie will tell the true story of the gymnast’s triumph against the odds to win Team USA’s first gold medal at the 1996 Olympics. Strug was hailed as an American hero when she completed her final vault at the Atlanta games on a badly injured ankle to snatch victory from the jaws of defeat.

Grace’s most notable role is that of the teenage wife of an insufferable commander in The Handmaid’s Tale, for which she’s up for an Emmy. Grace demonstrates not only maturity but a dedication to her craft in a panoramic show known for its thematically deep and harsh tones.