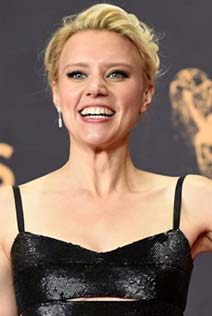 Kate McKinnon is set to join the cast of the new film centered on the iconic doll line starring Margot Robbie and Ryan Gosling.

America Ferrara and Simu Liu are also on board with Greta Gerwig directing.

Plot details are unknown, but given Gerwig’s track record as a director, one can expect that this won’t be your typical take on the doll’s story. Robbie is producing the film under her LuckyChap Entertainment production banner along with LuckyChap’s Tom Ackerley. Robbie Brenner also will produce through Mattel, as will David Heyman via Heyday Films. LuckyChap’s Josey McNamara and Mattel’s Ynon Kreiz are executive producers.

It isn’t currently known what role Kate McKinnon will take on in the film, but fans are sure to be delighted by the news that she’ll be starring alongside Robbie and Reynolds in what could end up becoming a considerable hit.

To date, it’s been a bit of a lengthy road for the film, which was first announced all the way back in 2009. Several twists and turns resulted along the way, with Oscar-winner Diablo Cody responsible for the script at one point and actresses Amy Schumer and Anne Hathaway considered for the titular role.