Hurley And Hugh Together Again - On Screen 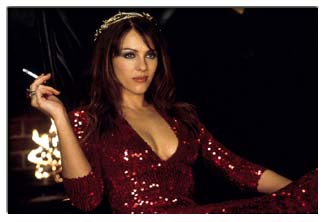 Beautiful ELIZABETH HURLEY wants to act with HUGH GRANT - because they're not going out together anymore.

The model and actress says she will consider appearing in tandem with the NOTTING HILL star, who she broke up with earlier this year (MAY00) - and admits the pair already have something in mind. She says, "When we were together as a couple, we never did. Now that we're not together, we actually have a great idea for something."

And the BEDAZZLED star, who was spotted kissing new love STEVE BING this weekend (21/22OCT00), confirms Hugh is still a big part of her life. She says, "We talk at least twice a day and if we're in the same city, we're together constantly. "Our offices are next-door to each other at work. I think it's great, that even though we're not together anymore, we can still be great mates. "I'd hate not to have Hugh in my life." (CPT/WNWCAN/JM)