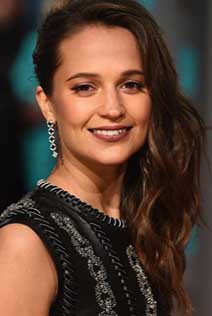 The 33-year-old star is to take on the role of Katherine Parr, King Henry VIII's sixth and final wife, in the movie, which is based on Elizabeth Fremantle’s historical novel 'Queen’s Gambit'.

Jude Law will play Henry in the film, which will be helmed by Brazilian filmmaker Karim Ainouz, his first English language movie.

Ainouz previously said: "I could not be more excited to be bringing the undiscovered story of Katherine Parr to the screen, a ferociously brilliant woman who I am inspired by deeply and has been largely invisible, or certainly under-represented in English history."

The film will follow Queen Catherine Parr, who was the sixth and final wife of King Henry VIII (played by Jude Law). Although her marriage could put her life in jeopardy, especially since two of King Henry VIII's wives were beheaded, she continues on with her plan to convert Henry to becoming Protestant like her. At the time, many Protestants were being persecuted, with a rise in arrests and executions.