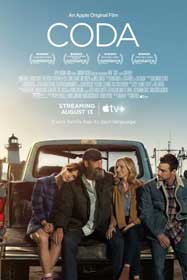 The first film with a cast of predominantly deaf/non-hearing actors in leading roles takes home Oscar.

The film follows the story of a child of deaf adults, also called a CODA, Ruby, the only hearing person in her family. When Ruby gets a chance to pursue music at the prestigious Berklee School of Music in Boston, she is torn between the fear of abandoning her family while their business is being threatened and her love of music. The film's cast also includes stars Eugenio Derbez and Daniel Durant.

The Best Lead Actress Academy Award went to Jessica Chastain for The Eyes of Tammy Faye. Based on the documentary of the same name, The Eyes of Tammy Faye serves as a biopic of evangelist Tammy Faye Bakker, from her humble beginnings through the rise and fall of her televangelism career. Chastain, who also served as a producer, was unrecognizable and yet powerfully convincing in the role.