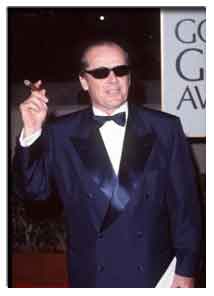 JACK NICHOLSON thinks he has put a new spin on the stereotypical role of the homicide detective in his new film THE PLEDGE.

The legendary Hollywood actor believes his character in the SEAN PENN directed movie, DETECTIVE JERRY BLACK, has a vulnerability not usually associated with the usual "tough, hard-bitten" cop. He says, "I wanted him to be less inured to the job. I didn't want to play that conventional wisdom of nothing affects him."

And the 63-year-old star has explained why the movie represents his first screen appearance since he won an Oscar for the 1997 comedy AS GOOD AS IT GETS. He explains, "I did take a year off because I do that from time to time. Then you take six, eight months to make a deal, then you make the movie and then the movie comes out, that's all. "It's not that long. But I'm delighted that you're paying attention to me!" (CPT/WNWCGG)