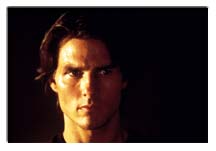 TOM CRUISE's voice has been sampled on an explicit gay dance record.

The actor's dulcet tones have been lifted by musical duo SMALL PHAT ONE - also known as PHATS AND SMALL - from the film MAGNOLIA, in which Tom plays a sex therapist.

While the track is going down a treat in gay clubs, it's unlikely the sexy star, who's been dogged by allegations of homosexuality despite his marriages to actresses MIMI ROGERS and NICOLE KIDMAN, will agree to a mainstream release of the record - which has him saying "Respect the c**k" over and over again. (KW/WNSBE/PDD)