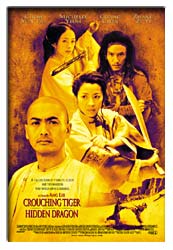 Star director ANG LEE is reported to be working on a follow-up to his worldwide hit movie CROUCHING TIGER, HIDDEN DRAGON.

Lee is planning a prequel to the martial arts film, which has been nominated for a massive 10 Oscars. According to British website ANANOVA, the follow-up is likely to be called PRECIOUS SWORD, GOLD HAIRPIN - although this title has yet to be confirmed by the film's makers.

The new movie will revolve around the ownership of the mysterious GREEN DESTINY sword, which features prominently in the first film. Most of the characters from the original film, starring CHOW YUN- FAT and MICHELLE YEOH as mythical Chinese warriors, are expected to return in the new film - which is currently being scripted by SIA MEI HUA. However is not known whether the original stars will reprise their roles. (CPT/WNWCAN)