Planet Of The Apes Mystery Ending 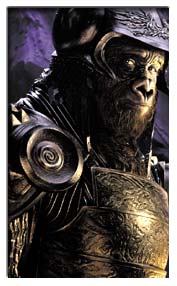 The ending of the new Planet Of The Apes (2001) movie is a secret - according to star of the film Michael Clarke Duncan.

The Green Mile, The (1999) actor, who plays ATTAR, one of the primates in the eagerly anticipated remake, says director Tim Burton has filmed a massive five endings to ensure the final finale is kept a secret. He says the ending chosen is "fantastic" and "will blow your mind." Fans will have to wait until the film is released in August (01). (ES/WNWCAN/CPT)