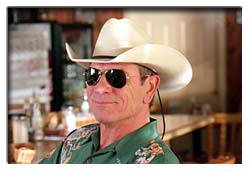 Jones and DAWN MARIA LAUREL tied the knot in a private ceremony in San Antonio, Texas.

The couple met in 1995 on the set of the film THE GOOD OLD BOYS. Laurel, a photographer, is 18 years younger than her 54-year-old actor husband.

American District Judge FRED BIERY, who performed the service says, "It wasn't a big to-do." He declined to discuss details of the ceremony explaining, "These are very private people."

A spokesman for the actor adds, "They enjoy so much of the same things. They're both interested in polo and Tommy, himself, is very interested in photography." (RGS/WNWC/CPT)