Colin Farrell Was Pushed To The Limit 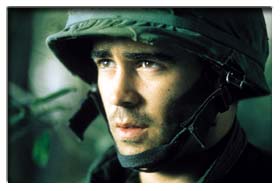 Rising Irish actor COLIN FARRELL was pushed to the limit by director JOEL SCHUMACHER while filming TIGERLAND (2000) in Florida.

The star spent weeks going through a tough physical regime every day for his role in the war movie. He says,"It was sh***ing hard, man. Twenty-eight days in a nowhereburg in Florida called Stark. It was well-named, I can tell you. And he drove us hard, which wasn't that bad because there was little else there apart from a PIZZA HUT, a DAY'S INN and a bar. "But Joel Schumacher was a real gent. A great man for the craic, telling tales of Hollywood and the system. We just loved listening to him. " (RXT/EH/PDD)