Peter Jackson Nervous About Lord Of The Rings Screening 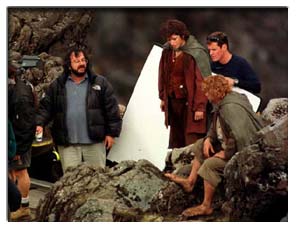 Lord Of The Rings: The Fellowship Of The Ring (2001) director PETER JACKSON was worried about showing some clips of the films at the CANNES FILM FESTIVAL.

As well as a montage of the first film, journalists were last week (begs07MAY01) shown footage from both the second and third instalments.

Jackson says, "It's also kind of scary showing what we're showing here. "It's weird, because it's not the movie. Lord Of The Rings is such a rich book with great plot machinations and characters. It's a little bit painful to just show a seven-minute kind of sketchy montage of the story. "

One of the director's hardest tasks was deciding how to turn hunky actors ELIJAH WOOD, SEAN ASTIN and the other HOBBITS into believably small people.

He explains, "It's an interesting challenge to make it believable and also for it not to take you out of the film and make you too self-conscious that these people are so small. "You see the hobbits have human qualities as well and are not sort of cartoonish. It's short people and tall people, and that's just the way Middle-earth is. " (RP/WNWCAN)