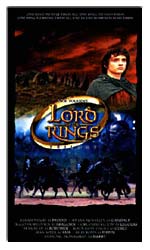 LORD OF THE RINGS fans are celebrating director PETER JACKSON's announcement that a rough cut of the magical movie has been completed.

Lord Of The Rings: The Fellowship Of The Ring (2001) is the first part of the forthcoming trilogy and is due to be released in December (01). But there's still plenty of work to be done, with stars LIV TYLER, ELIJAH WOOD and SEAN ASTIN all due to re-record dialogue from the film later this month (JUL01).

Composer HOWARD SHORE meanwhile, is still creating the film's score, and he's struggling with his task, claiming the project has the complexity and difficulty of writing an opera.

The soundtrack will incorporate the languages of the films, including DWARVISH, ELVISH and BLACK SPEECH, and is expected to have a strong Celtic theme. Irish folk musicians the BARLEYSHAKES were in New Zealand last month (JUN01) for a recording session and rumours are circulating that ENYA will also be involved. (KW/WNWCAN)