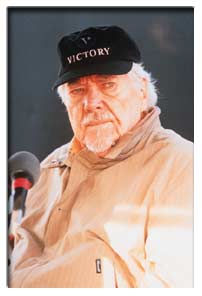 Director ROBERT ALTMAN hates the TV series his 1970 movie MASH (1970) - because it completely missed the point of the film. Altman received an OSCAR nomination for his irreverent black comedy set in a Mobile army Surgical Hospital during the Korean war but he says the subsequent TV hit series, that used the same characters as those played by DONALD SUTHERLAND, ELLIOT GOULD and ROBERT DUVALL in the movie, was "despicable".

Altman fumes, "Personally I hate that television series; I think it was despicable. It was just the opposite of what my MASH (1970) intended. It became a propaganda piece."

Altman adds that in his movie he tried to convey the lack of patriotic feeling in the war. He says, "It was as big a comment as I could make. You never saw the war, y'know? Just the results of it. The only gunshot you saw was in the football game at half time." (LE/UN/RP)