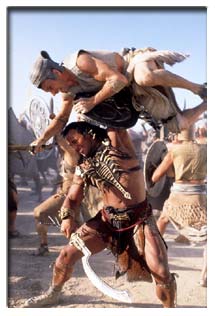 MUMMY, The (1999) sequel has become the first Hollywood movie of the year to pass $200 million (£54 million) at the international box office.

Worldwide box office for MUMMY RETURNS, The (2001) passed the $400 million (£308 million) mark last weekend (14-15JUL01). Since its initial international release on May 10 (01), the film, starring BRENDAN FRASER and RACHEL WEISZ, has opened at number one in every country and broken box office records around the world and remains in the top 10 films in current release in most countries where it is being shown.

The film also broke records for UIP and Universal Pictures as the number one UIP opening in Chile, Colombia, Czech Republic, Slovakia, Hungary, Mexico, Philippines, Slovenia, Spain and Thailand, and was Universal Pictures' biggest opening ever in Brazil, Iceland, Israel and Norway. (KL/WN/ES)