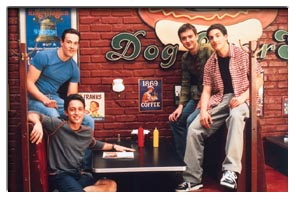 Studio bosses have pulled out of a marketing deal to promote condoms in conjuction with AMERICAN PIE 2 (2001). UNIVERSAL PICTURES had struck up a deal that involved placement of LIFESTYLE condoms in the upcoming sequel to the teen sex comedy.

The deal also involved a television commercial featuring the movie and the condoms. But Universal have pulled out of plans for the commercial following concerns from the MOTION PICTURE ASSOCIATION OF AMERICA.

The condoms will still feature in the film. American Pie 2 (2001) is the sequel to the 1999 hit AMERICAN PIE (1999) starring JASON BIGGS, CHRIS KLEIN, MENA SUVARI and TARA REID, about a group of friends who head off to college. (IG/WNWCHL/KMW)