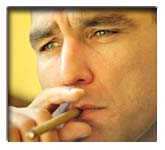 British actor VINNIE JONES avoids the Hollywood party scene because he finds it centres on business rather than enjoyment. The SNATCH (1999) star hates being fussed over and hates special attention given to him since his screen superstardom.

He says, "You can do the party scene if you want, but they're all grafting every time you go to these things and they're always over by 11 o'clock. They go with 30 business cards in their hand and leave with none. That's why I don't bother with all that crap. "

The former sportsman finds being an actor gets him more special treatment that he received as a soccer player. He smirks, "In football you've got apprentices that begrudge cleaning your boots. Filming, you've got assistants for this, assistants for that, PAs, trainees. I'd go in and say, 'Look, I'm not being rude, but don't fuss all over me. If I want a drink, I'll get it myself. '" (ES/WNBGU/PDD)