The End For Hollywood Action Movies? 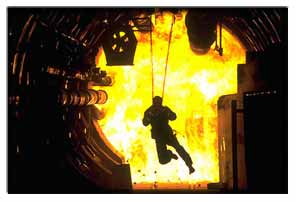 Arnold Schwarzenegger -type action films may be a thing of the past, after the terrorist attack on america last week (11SEPT01). As more and more citizens opt for light-hearted family entertainment movies, producers and directors are shelving action movie plans.

BRIAN GrAZER, producer of APOLLO 13 (1995) and LIAR LIAR (1997) says, "I think every mainstream producer and director and studio and television executive will be very cautious about entering a world where people's lives are in jeopardy. People will look toward more escapism, more comedies, more dramas about family love. "

And TOM POLLOCK, a producer and the former head of production at UNIVERSAL PICTURES, adds, "I don't think anyone wants to make a bodycount movie. Who can deal with that? It's pornographic. " (KME/WNE/NFA)