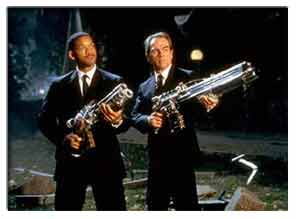 The script of MEN IN BLACK 2 (2002) is being changed in response to the recent terrorist attacks on New York Filming for WILL SMITH's sequel in New York was postponed after the tragic events at the WORLD TRADE CENTER. The film originally ended with Will Smith and TOMMY LEE JONES' characters fighting an alien worm at the top of the World Trade Center.

Reports claim that the action in the final scenes will remain the same, but will be set in a different part of the city to avoid offence to victims of the attacks. THE NEW YORK CITY MAYOR'S OFFICE OF THEATER, FILM, AND BROADCASTING has issued permits to allow filming to resume in New York, meaning the MEN IN BLACK 2 (2002) cast and crew can go back to work.