McConaughey and Bale try and make their fight scenes convincing 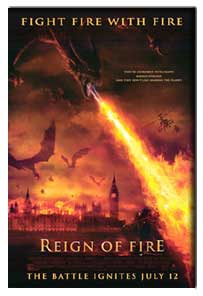 Meanwhile, fans of Hugh Grant and Colin Firth's 'realistic' fight in Bridget Jones will pleased to hear that Reign of Fire (2001) contains a similar scene. Matthew McConaughey and Christian Bale decided that they'd try and make their fight in the forthcoming flick convincing. 'Matthew and I looked at each other and went, "Let's make it as dirty as possible and also let's really go for it,"' reveals Bale. 'Matthew headbutted me and I ended up with a huge welt above my left eye. Absolutely real. I hit the deck after he headbutted me, I stood right back up, I got in a genuine punch to get him back and we kept on going and played out the whole scene. At the end of it, I was fine; I wanted to know that he was all right. I'm very happy that's the shot that's in the movie.