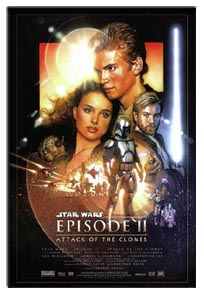 A production assistant on the last Star Wars film has been arrested after being accused of stealing images, storyboards and video files before the film was released, according to reports.
Shea O'Brien Foley, 30, worked for producers Lucasfilm while Star Wars: Episode II - The Attack of the Clones was being made, according to trade publication Variety.

Lucasfilm tried to keep details of the film secret before its release in May, when it became one of the most successful films of the year.

Lucasfilm tracked the leak down to a person with the nick-name "Shay" using Star Wars internet chat rooms, Variety said.

The Attack of the Clones went on to make $636m ($409m) at box offices around the world, making it the second most popular film of 2002 so far after Spider-Man.