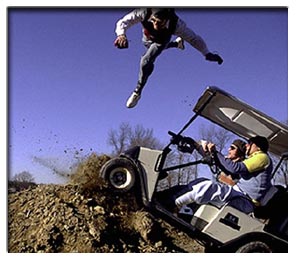 This weeks winner of the box office releases was the MTV inspired Jackass: The Movie (2002). The crazy stunts of Johnny Knoxville and friends attracted crowds of young men eager to see more of their stupid behaviour.

Jackass opened to $22.7 million pushing last weeks number one, Ring, The (2002), into second place. The horror film actually made more than it did the previous week though, by adding more cinemas.

Paramount offered to supply cinemas guards for the R-rated Jackass movie to prevent under 17's from sneaking in. MTV president, Van Toffler said, "We didn't expect to exceed $20 million for a film called 'Jackass.' Especially a film with no plot, no Oscar-calibre performances and no real writing. What they do in the movie sort of feels to me like what the Three Stooges would be doing if they were alive. Kind of slapstick twisted on its head in an extreme form."