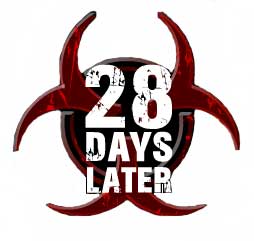 Leading British director Danny Boyle’s post apocalyptic thriller 28 Days Later (2002), today stormed into the UK box office charts, securing the number one slot in its opening weekend by taking over £1,500,079 (including previews) from 314 screens with a screen average of £4,702.

Produced by Andrew Macdonald (Trainspotting) and written by Alex Garland (The Beach), 28 DAYS LATER is a co-financed venture between Fox Searchlight Pictures and DNA Films. The UK is the first territory to release the film, with other territories, including the US, set to release in 2003.

Simon Hewlett, managing director of Twentieth Century Fox (UK) Theatrical commented 'The excellent result this weekend reflects a lot of innovation, commitment and the most wonderful collaboration with filmmakers who worked with us to exploit every possible opportunity to make this film a success'.

28 DAYS LATER follows the aftermath of a powerful virus escaping a research facility. Transmitted in a drop of blood and devastating within seconds, the virus locks those infected into a permanent state of murderous rage. Within 28 days the country is overwhelmed and a handful of survivors begin their attempts to salvage a future, little realising that the deadly virus is not the only thing that threatens them. The film stars acclaimed newcomers CILLIAN MURPHY (Disco Pigs) and NAOMIE HARRIS (White Teeth, The Project) alongside more established stars CHRISTOPHER ECCLESTON (Shallow Grave, The Others) and BRENDAN GLEESON (The General).