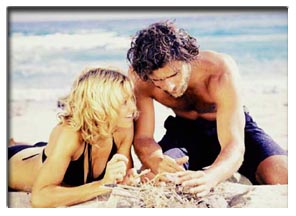 After opening for only two weeks in America before been taken off screens, it seems that Columbia Tristar are cutting their losses and not releasing Swept Away (2002) at all in the UK.

The movie directed by husband Guy Ritchie has taken a lot of criticism right from when it premiered earier in the year. A spokesman for the distributor said, "Following the disappointing box office results in the US, Guy Ritchie's Swept Away will not be released theatrically in the UK."

Swept Away (2002) opened to only $350,000 on its first weekend in the US and that has prompted the decision to put it straight to vidoe in the UK. The Washington Post said the film was "as awful as you've heard and as bad as you've imagined."