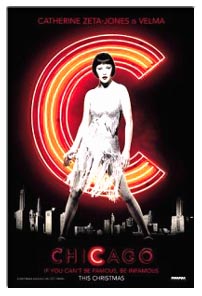 Hollywood actress Renée Zellweger made a show-stopping entrance at the world premiere of her new movie Chicago: The Musical (2002).

The star braved freezing temperatures in London for the first showing of the film.

The Welsh-born actress is expecting her second baby in March and is staying at home in the US with husband Michael Douglas.

Zellweger looked stunning in a sequinned black Chanel dress and with a new bobbed haircut. She went on a 10-minute walkabout to greet fans who had queued for hours in the cold to catch a glimpse of the star.

She was untroubled by the Arctic weather - but then she has just spent months in Transylvania filming a movie Cold Mountain with Jude Law.

"I'm not freezing at all, this is a beautiful spring day compared with the Transylvanian mountain tops," she said.

Gere said the film's big stars were all extremely impressed by each other's performances: "When we finally saw each other perform we were all like 'wow'," he said.