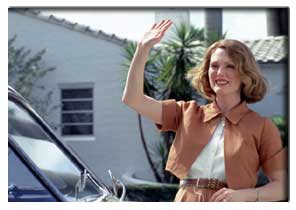 Double Oscars nominee Julianne Moore, is worried that her rare double nomination for this year's Oscars could backfire horrifically.

"The thing that's bad about two nominations is that you can be a two-time loser too," she told reporters

Moore has been critically hailed for both roles, as a conflicted 1950s housewife faced with a gay husband in Far from Heaven (2002) and as a suicidal 1950s wife and mother in the drama Hours, The (2002).

Moore also played down speculation that there had been a major sea-change in Hollywood that would create more roles for leading actresses in the future following this year's bumper Oscars crop of female-oriented movies.

"I do not think that there is a change. I think that every time people try to predict a trend or illustrate a change in Hollywood, the next year there is something different again," she said.