Our Film Is Free - If You Hate It. 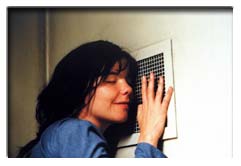 DANCER IN THE DARK, the controversial new film from LARS VON TRIER, has upset audiences so much cinema bosses are offering them their money back.

The disturbing musical, which stars eccentric Icelandic pop star BJORK, won the highest honours at this year's (00) CANNES FILM FESTIVAL - but reviews have been so mixed that the makers will refund patrons' ticket prices in Britain if they really hate the film.

A leading American magazine ran two reviews of the film - one called it "triumphant", the other called it "a crock".