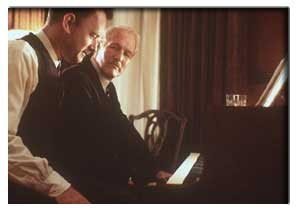 "I really should not have mentioned just those three because there are too many people I admire."

"No, it's probably closer to a vulture than a swan song. I don't seem to be able to retire," he said.

Newman said he doesn't know what his next project will be, but he knows who he wants as his co-star - his wife, Joanne Woodward.

"I'd love to do (another) film with Joanne," he says. "There's still a little vinegar left in the old dog yet."