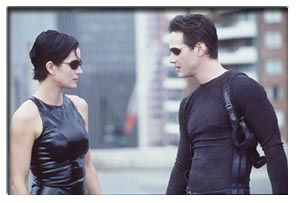 The second Matrix movie sequel is to open on giant Imax film screens in the US at the same time as standard cinemas.
Imax Corporation, which owns the technology behind the format, has struck a deal with Warner Bros to simultaneously show the third part of the action sci-fi trilogy, The Matrix Revolutions, on 5 November.

It will be the first time a Hollywood blockbuster has been released in two formats at the same time for the different-sized screens.

Its predecessor The Matrix Reloaded, which opens next month, will not make it to Imax cinemas until about three weeks after its general release.

Imax co-chief executive Richard Gelfond said the deal for the third Matrix movie was a "watershed" event for the company.

Canada-based Imax's high resolution screens are the equivalent of up to eight storeys high, accompanied by superb audio tracks.

Mr Gelfond said: "The Matrix is a visual spectacle.

"It has the kind of soundtrack that will take advantage of our 12,000-watt sound system.

"And most importantly, they're really the franchise movies of the year. There wasn't a better film than The Matrix, and in fact, we got a little lucky that there were two of them."

Unlike last year's digitally remastered Imax releases of Apollo 13 and Star Wars: Episode II - Attack of the Clones, The Matrix films will not need to be shortened.

This is because Imax equipment can now support films up to 150 minutes long.

The Matrix Reloaded makes its world première on 15 May at Cannes Film Festival.