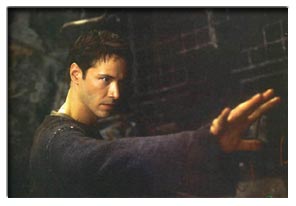 Keanu Reeves has said he's way too knackered to come back to Australia for a fourth Matrix.
And in a further snub, the former Bondi floater has confirmed he won't be making it back for The Matrix Reloaded Sydney premiere next week.

The star of the trilogy instead indulged his fans back home this week by working the press line at the film's Los Angeles premiere and signing autographs.

Reeves' Aussie co-star Hugo Weaving, who plays the relentless Agent Smith in the sequel, attended the LA premiere but won't be making it home for his moment of fame either.

With The Matrix Reloaded due out next week and The Matrix Revolution to hit cinemas in November, Reeves says he's had enough. He's pooped.

It's ta-ta to Sydney and on to the internet for his Penfolds Grange Hermitage, according to Entertainment Tonight.

On day 211 of back-to-back shoots for The Matrix Revolutions, the star of the sci-fi action flick cited pure exhaustion as the reason he won't be coming back to Sydney where he made his home during the filming of the $1 billion plus trilogy.

Asked whether he'd be ready for a Matrix 4 when the trilogy finished up in cinemas, the star revealed: "It will be someone else. I'm tired."

While Reeves says he "feels like a Sydneysider" after spending so long in the Harbour city, homesickness got the better of him.

"I'm going to cry. Don't make me cry. This film pushes you  I mean, acting is something I think is beautiful, but it is just missing home and missing friends and family, that's the hardest thing," he said.