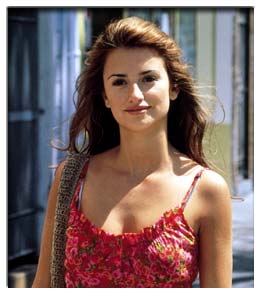 The Spanish actress is there to promote her new film, swashbuckling costume drama Fanfan La Tulipe, which has been chosen to open the festival.

There were fears some Hollywood stars would stay away from Cannes in protest at France's opposition to the war in Iraq.

But the fears have proved unfounded with Nicole Kidman, Clint Eastwood and Keanu Reeves among the big names jetting in.

Celebrity watchers are looking forward to the prospect of Kidman attending the same event as Cruz, the current partner of her ex-husband Tom Cruise.

However, organisers have not scheduled Kidman's new film, Dogville, to be screened until next week.

The most hyped event of the festival is the European premiere of The Matrix Reloaded, which is tipped to be this summer's biggest blockbuster.

Stars Keanu Reeves, Carrie-Anne Moss and Laurence Fishburne are all expected to attend the screening of the £84 million movie.

Arnold Schwarzenegger will also be in town to promote his return to the screen as the Terminator in Terminator 3: Rise of the Machines (2002).

There are 20 films in competition for the prestigious Palme d'Or at this the 56th annual Cannes Film Festival.