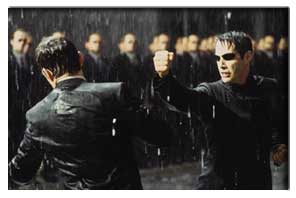 Pirate copies of blockbuster hit Matrix Reloaded, The (2003) are available to download online, less than two weeks after the film went on release around the world.

A high-quality copy of the film is being downloaded by hundreds of people each day via a website which uses the file-sharing computer program BitTorrent.

The availability of the film online will come as a blow to executives who co-ordinated a worldwide release of the film in an attempt to thwart piracy.

Low-quality copies of the film on DVD have also been reported for sale at a major traders' market in London.

Although it is not unusual for pirate copies of blockbuster films to appear on the internet soon after release, they are often of poor quality, filmed on a hidden videcamera by a cinemagoer.

The picture is often jerky, with poor sound, punctuated by ambient noise in the cinema.

But the copy available using BitTorrent appears to be have made from a film print, and is in widescreen format with surround sound.

The download also includes a teaser trailer for the third film in the sci-fi trilogy, The Matrix Revolutions.