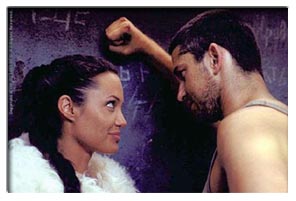 Angelina Jolie says she hated filming the first Tomb Raider movie because of the way Lara Croft was portrayed.

She described her character as nothing more than bimbo in a pair of ridiculously short hotpants.

That said, she recently finished filming the sequel Tomb Raider: The Cradle of Life, due for release this summer.

She added that the first shooting of the screenplay had not gone well and that she had to argue with the screenwriter about the character and her shorts.

But she added she was pleased she was able to turn the character into the heroine she is today.

Jolie said: "Nowadays Lara really is alright, she is like a special friend."