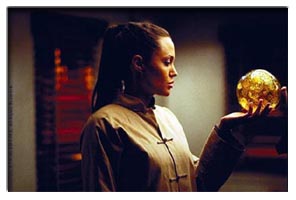 Angelina Jolie has told how she has ditched her actor father Jon Voight saying: "I no longer see us as father and daughter."

The actress had rekindled her relationship with her estranged father and even acted with him in the Tomb Raider movie.

But she tells the new edition of Radio Times, out tomorrow, that they have had no contact for months because she no longer values his views.

Twice-divorced Jolie - whose second Lara film The Cradle Of Life is released next week - said she had no regrets about severing her ties with him.

Midnight Cowboy Oscar-winner Voight split from Jolie's mother when she was only a year old. But the actress said that starring with him in Tomb Raider was a "bonding time".

She said: "We seemed to understand each other and it was fun, but afterwards he returned quickly to old habits of being judgmental."

In a TV interview last year Voight said she should seek help for "serious mental problems". He later accompanied her to the airport as she flew off on a mission for the United Nations.

Jolie, 28, said: "He gave me a letter in the car and said 'this is my truth, this is unchanging'. I was unaware of what he'd written and said, 'That's wonderful, I love you, see you later'.

"Then I opened the letter. He'd written I was a bad person. I was upset and thought of 100 replies, and then decided I don't value this person's opinion so it's okay. I no longer see us as father and daughter."