Weisz in talks to join Reeves in occult movie 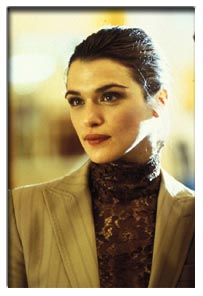 Rachel Weisz is in negotiations to star opposite Keanu Reeves in a new movie based around the occult world.

Constantine stars Reeves as John Constantine, a man who dabbles in the occult and teams with a female police officer to fight evil forces.

Weisz would play Angela, an officer who becomes involved with Constantine when her twin sister dies in a mysterious suicide.

The movie - an adaptation of the DC-Vertigo comic book Hellblazer - will be directed by Francis Lawrence.

Fans of Weisz, who is best known for her role in The Mummy, will next see her in new movies Runaway Jury, alongside John Cusack, Gene Hackman and Dustin Hoffman, and Envy, with Ben Stiller.

She is currently shooting the indie feature Daisy Winters.