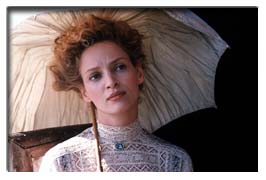 Hollywood screen stars Uma Thurman and Ethan Hawke have split. After five years of marriage and two children - daughter Maya, five, and son Roan, one - the pair have separated, reportedly because of Hawke's romance with 22-year-old Canadian model Jen Perzow. According to American tabloid the Star, Pulp Fiction beauty Thurman, 33, learned that the affair took place while she was in Vancouver filming Paycheck with Ben Affleck, and Hawke, 32, was on the other side of Canada in Montreal shooting Taking Lives with Angelina Jolie this summer. A source says, "Ethan and Jen went out of their way to avoid being seen in public - but they still shared intimate evenings at his rented loft. Ethan was giving Jen gifts until the time his movie wrapped in August and he left Montreal." A source close to Thurman continues, "When Uma first got wind of Ethan's cheating, they talked and she decided that maybe a one-night fling could be just a mistake and they could work through it. But when people told her that he was having an affair and was with the same girl more than once, it appeared as if it was instantly over in her mind. It seemed like there was no talking, no forgiving, no third chances." And while the pair have parted, no moves have yet been made to make their separation permanent. A representative for the couple states, "At this present time, there are no plans for a divorce."