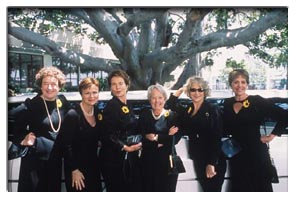 Calendar Girls has gone straight to the top of the UK box office chart.

Starring Helen Mirren and Julie Walters as Women's Institute members who stripped off for a charity calendar, it took almost £1.8m in its first weekend..

It knocked Pirates of the Caribbean - which earned £1.2m - off the top spot.

American Pie 3 was the third most popular film with Jeepers Creepers 2 completing the top five.