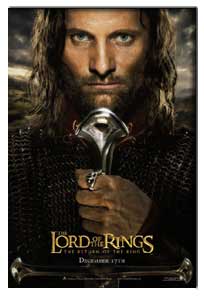 The first trailer to the final Lord Of The Rings film will appear in cinemas around the world this weekend.

The two minute clip will be fans' first look at The Return Of The King.

After its release in cinemas on Friday, the trailer will appear online on Monday on the film's official website.

The final film in the trilogy will arrive in UK cinemas on December 17. The first two films, The Fellowship of the Ring and The Two Towers, will be re-released in cinemas in the weeks leading up to Return Of The King's appearance.