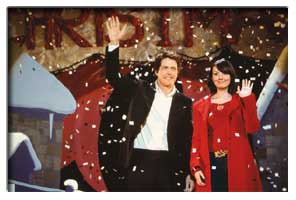 Hugh Grant says he was surprised by Martine McCutcheon's filthy sense of humour during the filming for Love Actually.

Grant said McCutcheon held her own with him and Billy Bob Thornton during the making of Richard Curtis's new romantic comedy.

Grant plays the British prime minister while Thornton is the US president. Both fall for a tea girl, played by McCutcheon.

"Billy Bob and I got on very well because he's pervy and depraved. I don't think he would mind me saying that. It's common knowledge," Grant told Total Film.

"And Martine is equally filthy in many ways. So filthy that I found myself in the very rare position of being almost shocked by her. I became the studdy one. She actually called me Starchy!"

Grant added that he was highly impressed with McCutcheon's performance in the film.

"I was distressed at just how good Martine was - I was frightened that she was going to outshine me. I think she's a film star. Definitely."