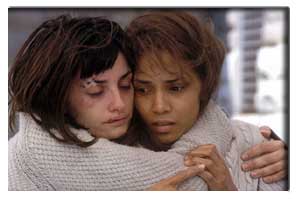 Halle Berry ranks among the world's sexiest women but she cannot find love.

Sleek, curvaceous and seductive, Berry's beauty is matched only by her acting talent, which won her a Best Actress Oscar last year.

But while she may be the envy of millions of women worldwide, she admits that her private life is a mess.

Her life has been scarred by a series of failed relationships.

And last month she separated from her second husband, musician Eric Benet.

She says she walks a fine line between sanity and insanity and believes she will be in therapy for the rest of her life.

"My relationships suck," she says with a helpless shrug.

"I've had an issue with finding the right guy. I'm not real good at it."

She is the picture of health and her glossy hair tumbles over her shoulders. But beneath it all she is in turmoil.

She speaks frankly of the end of her two-and-a-half-year marriage, her emotional upsets and her search for happiness.

"I don't know if I will ever get married again. I know now the perfect guy doesn't exist," she admits with a sigh.

She believes her troubled childhood is at the root of her heartache.

She grew up without her estranged father and witnessed her mother Judith's unhappy love life.

"I think being without a father has made a dramatic difference in my life," Berry explains.

"I used to think it really didn't matter because I had such a strong, wonderful mother.

"But as I've got older I've seen a pattern repeating itself over and over in my life."

Life certainly was not easy for her as a child.

Jerome Berry, an ex-GI who died in January, left home when Berry was four. Her Liverpool-born mother raised her and her elder sister, Heidi, alone in their hometown of Cleveland, Ohio.

A teenage beauty queen, Berry survived an unhappy marriage to baseball player David Justice and a series of disastrous relationships.

One former boyfriend sued her for $100,000 and another hit her so hard that she became partially deaf. She has also been linked to director Spike Lee and actor Wesley Snipes.

With Benet, it seemed she had finally found her Mr Right. She bonded with his daughter India, 12, whom she treated as her own child.

But their marriage proved short-lived, unravelling in tears and recriminations when Berry discovered that her husband could not control his roving eye.

Berry remains very close to India and is continuing to bring her up.

Now she wants to work on changing her attitude to relationships.

"Those are things I haven't always believed about myself in the past and now I'm going to work on myself rather than look for a perfect person," Berry says.

She believes she will always be in therapy.

Acting helps release some of her tensions, as she found in her latest role, as a woman trying to cling to her sanity in the horror film Gothika.

Berry found it easy to relate to her character.

In the movie she and co- star Penélope Cruz, who plays a dangerously disturbed patient, share a shower scene with dozens of naked women. The two stars were the only ones to cover their breasts.

"Penelope and I kind of wimped out," she says with a smile.

But she is happy to undress if necessary. She appeared topless in Swordfish and romped naked with Billy Bob Thornton in her Oscar-winning performance in Monster's Ball.

"My sexuality is a part of me I like to play with and explore," she says.

Despite her tumultuous private life, she thinks of herself as the kind of person who always looks on the bright side and counts her blessings.

"A girl can't have everything. That's how I'm looking at it," she says. "I have so many wonderful things in my life that I'm really happy about."

"But I'll take a little time, and hopefully next time around I'll get it right."